How to Choose Surfboard Fins

A good set of surfboard fins can be the difference between a good surfboard and a great surfboard. The Surf Station carries quality surfboard fins including thruster fins, twin fins, quad fins, 5-fin setups, longboard fins and more from a variety of great brands including FCS, Futures, Endorfins, Rainbow Fin Co, True Ames and more.

But figuring out which Surfboard Fins are the right ones for your board and your surfing can be a bit tricky. There's a lot of terms and numbers thrown around so we've created this guide to try and educate you on which set of fins will have you ripping your hardest. Let's dive in!

Glassed-on fins are built and laminated directly into the surfboard itself. These fins are essentially apart of the surfboard. Glassed on fins were popular with the early surfboard designs but aren't used as much these days for practicality reasons. Glassed-on fins are very easily damaged and can be difficult to repair. Not being able to remove the fins from the board increases the risk of damage to the board/fins. But some surfers still swear by these fins. Having the fins directly glassed to the board offers a feel like no other.

Removable fins are primarily what is used in most surfboard design today. The surfboards have fin boxes that allow different fins to be inserted and removed from the boxes. These fins are inserted, and held in place by using a fin key and tightening small screws to secure the fin in place. Be careful not to overtighten the screws! This can lead to problems. Some of the newer fins from FCS II and other brands a doing away with the screws and fin key and the fins are simply inserted and locked into place using a special locking method.

FCS stands for Fin Control System. Originally designed in the early 1990s, FCS is the most successful and widely used surfboard fin system in the world. These fins have two tabs or plugs that are secured to the board using set screws. FCS recently launched the FCS II keyless Fin Standard, meaning fins can be installed or removed without a key or grub screws. FCS II is also backwards compatible, meaning you can use your old dual tab FCS fins with the new FCS II system. A compatibility kit is required.

Futures fins are the major alternative to an FCS setup. Futures fins are a single tab type set up rather than dual tabs. The single bar fits into a slot that spans the entire length of the fin box and screws are tightened to keep them in place.

*FCS Fins (Dual Tab) and Futures Fins (Single Tab) are NOT cross compatible. You must use fins that correspond with the fin boxes installed on your surfboard.

Selecting the right size fin for you all comes down to weight. Check out our simple guide below as a reference to what you should be riding. If you are in between sizes, take into consideration your level of surfing and the types of waves you'll be riding. A general tip - it's better to size up if you're going to be riding more powerful waves or on a larger board.

*Tip - check what size Lonboard fin box you have to make sure you order a correct fit. If you have ?'s, contact us on live help or email support@surf-station.com 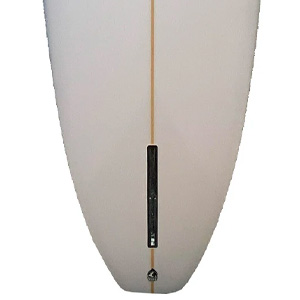 Single fins are most commonly used with longboards and larger sized surfboards. A single fin will be inserted into a single box on the base of the tail. Be sure and check what size longboard fin box you have to make sure you order a correct fit. Single fins can sometimes be moved within the box further forward forward for a looser feel, or further back for more control. A quick easy tip for longboard sizing - what is the size longboard you are riding? The length of board in feet can correspond to the fin in inches. So if you are riding a 9' longboard, generally a 9" surfboard fin would work well for that board. 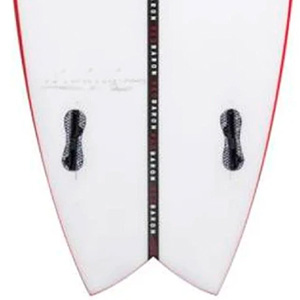 Twin fin boxes mean there is a dual configuration or only 2 boxes. Twin fin set ups generally give a surfboard a loose, fun, playful, maneuverable feeling to it. Twin fins have a more 'skatey' feel to them and are great for long, arching, drawn out turns. Fish surfboards are commonly seen in a twin fin set up. Twin fins are not idea for larger surf or big wave riding. 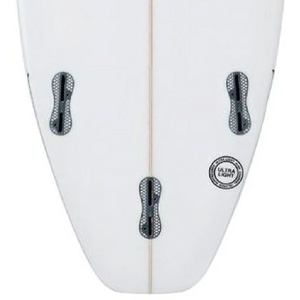 Most standard surfboards these days come as a thruster/tri/3 fin set up. Tri fins perform well because they combine the perfect combination of stability, maneuverability and control that most surfers look for. A tri fin set up can give you some alternative options on fins used within the configuration. You can put in the two side fins and leave out the back middle to turn it into a twin fin. Or you can insert a smaller trailer fin in the back for a slight touch of more control. 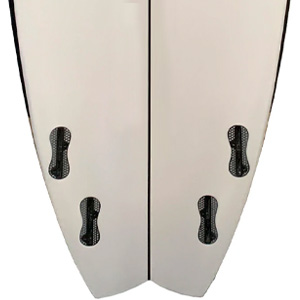 Quad fin setup are a 4 fin configuration with 2 fins on either outside of the board and no middle fin. Quad fins are used on groveler type of surfboards or in smaller surf to generate speed. This is done by the channeling the water out the back tail of the surfboard generating more speed. Quad fins could also be ridden as a twin fin setup. 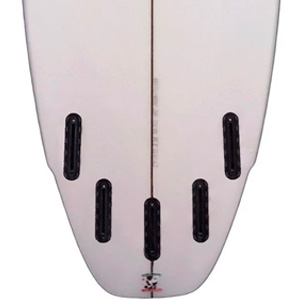 5-fin set up or Tri-Quad Fin Setups as they are sometimes called come with 5 fins - but they are not meant to be ridden with all 5 fins at one time. This fin set up gives you the ultimate freedom in fin configuration. You can ride these boards as a tri-fin/thruster set up, twin fin set, or quad. Change them around and see what works best for your board. 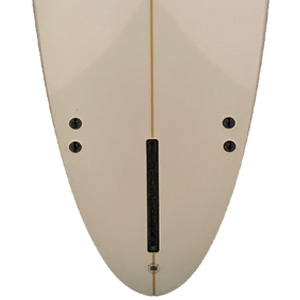 2+1 fin setups are typically found on larger types of sufboards like: funshapes, mid-length's and longboards. A 2+1 fin set up is a combination of two smaller outside fins with a single fin box in the middle/back. The middle box is typically longer allowing you to slide your single fin forward or backwards. You can add in 2 regular thruster fins on the outside or smaller side bites for a little bit more stability and control.